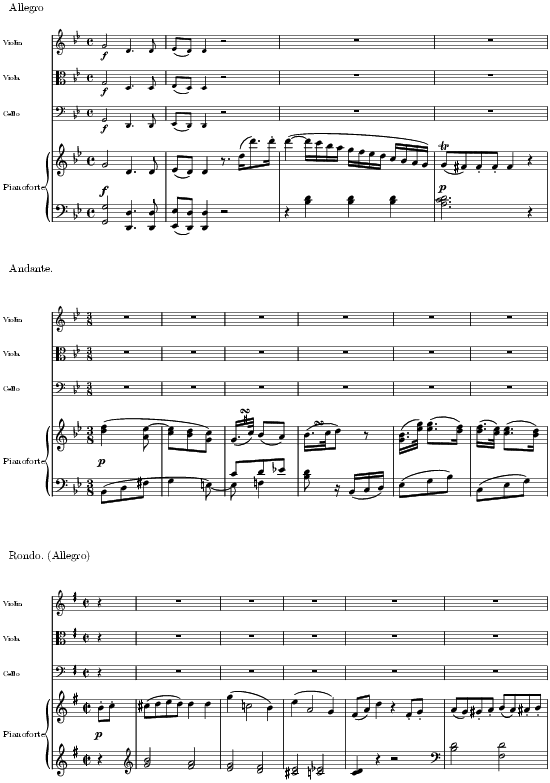 In his career as a freelance musician in Vienna, Mozart ventured to compose two piano quartets, to be published by Franz Anton Hoffmeister, a friend of Mozart and the director of a successful publishing firm. The Piano Quartet in G Minor was the first to be written (Mozart begun it in July 1785, and finished it on October, 16th 1785), followed by the Piano Quartet in E-flat major KV 493 (June, 3rd 1786).

However, the quartet KV 478 did not achieve enough success to continue Hoffmeister's plan with the publication of KV 493: the audience thought the music was too much complex and difficult. One must remember that at Mozart's time the piano quartet was considered a lighter genre than the string quartet, and was supposed to be performed by amateurs rather than professional musicians. Because of these reasons, Hoffmeister broke down the contract and the second piano quartet was to be published by Artaria.

Today the piano quartet KV 478 is considered to be one of Mozart's finest creations. Particularly remarkable is the first movement, whose great sense of unity is given by the assertive main theme, and expecially by the descending fourth which opens it (which is to be found also in the second theme and in the development). After a thoughtful second movement, the Finale lightens the mood of the piece (although there is space for a dramatic section in E minor, bar 169). Mozart will re-use the idea of closing a G minor piece with a G major rondo in the great string quintet KV 516.

Worth of mention is the fact that Dvorak used the opening theme of this quartet in the Finale (Allegro con brio) of his String Quintet in A minor Op. 1.